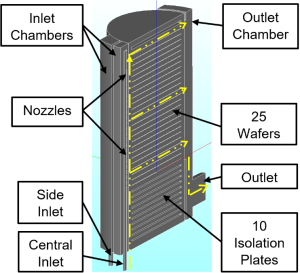 Moore’s Law, a traditional benchmark in the semiconductor industry, has led to miniaturization, speed and efficiency improvements in modern microelectronics. The primary approach to keep up with the trend is to shrink the size of various features within an integrated circuit (IC). In recent years, however, engineers have extended fabrication techniques to sub-10 nm scales and layering circuitry on top of one another to develop 3D circuits  and thereby adhering to Moore’s Law.

There are several benefits of modern 3D semiconductor architectures including small footprint, improved performance, reduced power, and integration of diverse circuits in a single package. However, disadvantages such as design and manufacturing complexity along with poor fabrication yield which directly affect the cost of these chips. With research accelerating the means of producing cheap mainstream 3D IC structures, atomic layer deposition (ALD) has emerged as a critical fabrication technique.

Atomic Layer Deposition (ALD) is a technique for sequentially depositing thin films of gaseous reactants (called precursors) onto a substrate. The advantage of ALD over other chemical vapor deposition techniques is that gas-to-surface depositions that occur in ALD processes are intrinsically self-limited. Each ALD cycle starts with the introduction of a specific mixture of precursors followed by deposition which terminates when all the sites on the wafer have reacted. Therefore, ALD can achieve atomic layer precision as deposition occurs one layer at a time. Repeated cycles of different precursors result in the formation of a desired chemical deposition on a substrate which is ready for next stages of fabrication. The self-limiting nature of ALD processes is  beneficial for chemically processing high aspect ratio via, trenches, etc. in next generation high-capacity flash memory devices.

The main drawback of depositing one-layer at a time comes with low throughput – ALD processes are slow. Novel reactor designs are needed to achieve faster processing times while maintaining quality of deposition. Processing a batch of 10s – 100s of stacked wafers inside a reactor is one viable method of increasing throughput. Several configurations of batch processors exist – these designs focus on the arrangement, orientation and number of wafers of a stack.

Optimization of reactor design and chemistry is critical to achieve high yields and lower costs of manufacturing semiconductors. Experimental prototyping of large reactors with complex geometries is tedious and expensive. Some overheads that are associated with every experiment are high cost of precursor gases, reactor prototyping, long experiment cycle times, and needless human exposure to toxic chemicals. These undesirable factors prompt engineers to resort to design and development using high fidelity numerical software tools such as Esgee Tech’s suite of multiphysics simulators.

Our users at The University of Texas at Austin in collaboration with researchers at Samsung Electronics have modelled multispecies gas dynamics of an industrially relevant multi-wafer ALD batch reactor. Their work published recently in the Journal of Vacuum Science and Technology A, has also been featured as an editor’s pick for the journal’s September issue (https://doi.org/10.1116/6.0000993).

An in-depth look inside the ALD batch reactor:

The problem consists of a large industrial thermal ALD batch reactor that houses 25 wafers. A specific mixture of carrier gas N2 and silicon precursor Si2Cl6 (hexachlorodisilane, commonly referred to as HCD) are fed into the reactor at a rate of 5 SLPM through the central and lateral inlets. Three chamber pressure is achieved by controlling inlet flow rates. The walls of the reactor are treated as isothermal boundaries at 873 K.

The kinetic particle model in VizGlow™ is able to accurately simulate the gas dynamics in the flow inlet feed pipes, expansion through micronozzles, across the inter-wafer zones and the outlet. A particular region of interest among design engineers is the geometry of the spray nozzles and vicinity past nozzles. In this study, VizGlow™ captures the viscous dominating effects in the nozzle region due to the low pressure, high temperature, and small dimensions, the flow remains subsonic through the nozzle.

An important outcome of this simulation is significant non-uniformities recorded in the precursor distribution within a particular wafer and across different wafers. This is critical to understanding the process yield in these reactors.

The studies, designs and resulting improvements surrounding wafer processing reactors are endless. This study paves a path to future studies on a variety of reactor configurations using VizGlow™.

Process engineers can optimise their reactor design by studying the effect of important parameters such as precursor flow rates, gas composition, nozzle designs, layout of the nozzles, orientation of wafers, size of wafers, pressure and thermal conditions – everything about a batch reactor can be accurately described with truly and fully coupled multiphysics with VizGlow™. Research to improve reactor efficiency through rapid trade studies can be performed using results from VizGlow™ at a much faster pace and a much cheaper budget than traditional experimentation.

We would love for you to receive a copy of the manuscript, send us a word at info@esgeetech.com!

If you have reached this far, you must be interested in knowing more about how our tool can help you model your semiconductor reactors. Send us a message at info@esgeetech.com. You can follow us at LinkedIn to keep up with our latest posts surrounding the semiconductor industry. 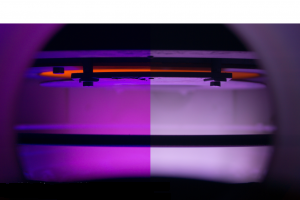 How to Simulate Plasma Discharge in a Meter-scale ICP Reactor?

Today, every consumer electronic device and computing hardware relies on plasmas in their core manufacturing technology. The semiconductor industry isn’t the only industry to be revolutionized by plasma and its limitless applications; the metallurgical, aerospace, automotive, chemical and medical industries also rely on plasma technologies.

Plasma can be generated in several ways; one of the common forms of plasma used in industrial applications is Inductively Coupled Plasma (ICP). As its name suggests, the energy for producing and sustaining the plasma is provided by induction coils to which high-frequency alternating current is supplied. This type of plasma can be produced at a wide range of operating pressures, flow rates, and feed-gas compositions. As a result of its versatility, ICP’s are especially favored among semiconductor manufacturers to produce high-density plasmas for etching, deposition, and other processes in the fabrication of invisible electronic components embedded in very large-scale integrated circuits that constitute logic, memory, and other types of chips. A similar class of ICP’s discharges, albeit much bigger in size, is also used in the manufacture of flat panel displays and solar panels.

Plasma discharge, flow, and electromagnetic simulations are challenging on many accounts: transient electromagnetic fields, spatio-temporal variations in electron and ion densities due to chemical reactions, complex circuit configurations for power supply, and a plethora of surface reactions all need to be taken into account. The industrial researchers and product developers desire nothing less than highest fidelity simulations for understanding the plasma behavior at a wide range of length-scales.

Over the past 15 years, at Esgee Tech, we have developed our flagship simulation software VizGlow™ to accomplish the most challenging objectives as desired by the semiconductor industry. VizGlow™ is capable of simulating ICPs at a great fidelity by coupling plasma, electromagnetics, reactive flow, surface chemistry, and circuit dynamics. It supports large-scale 3D unstructured mesh of accurate and complex industrial wafer-processing reactors. In addition, various modifications to the classical ICP are possible such as multiple turn coils (this study), pulsing, multi-frequency input power, RF biasing at select surfaces, application of permanent magnetic fields, and operation in cavity resonant modes. All of these modifications can be simulated using VizGlow™.

An ICP reactor is a workhorse for several semiconductor, flat panel, and solar industrial applications. The advantage of inductive power coupling is that there is low plasma potential drop across sheaths, generation of high-density plasma at lower electron temperature, which leads to higher ion flux and reduced ion bombardment energy at the wafer surfaces. Additionally, multiple spatially distributed inductive coils with multiple turns each helps generate a more uniform plasma covering a wider volume and processing surface area. Using multiple coils also allows for the generation of a complex and deliberately tailored spatial distribution of the electromagnetic fields that in turn enables exploitation of interesting properties of electromagnetic wave interference patterns for generating plasmas. Several parameters such as: position of the coils, coil structure, and current direction, could be altered to optimize the design of an ICP plasma. These are merely a few of the large number of parametric studies that one could explore using VizGlow™.

VizGlow™ enables large-scale reactor simulations such as the reactor discussed here, which measures 2.03m x 1.54m x 0.805m (LxWxH), and is used for processing wide area substrates such as for flat panel displays and solar panels. The computational domain is divided into following regions/sub-domains:

Plasma uniformity across a wide area is essential for generating uniform ion fluxes and radical fluxes at the wafer surface. The figure on the right illustrates that a dense plasma is generated directly underneath the coil and is highest underneath the dielectric window where the electromagnetic waves are introduced. VizGlow™ is able to capture the electromagnetic skin effect, i.e, shielding of the electromagnetic waves by high density plasma. Moreover, power deposition only occurs at a small zone within the skin depth. The active radicals and the ions then diffuse from this generation zone to the substrate usually located at the bottom of the chamber.

The results indicate that this fundamental ICP property is well represented by VizGlow™.

In an electromagnetic field, Poynting Vectors represent the electromagnetic energy flux and its direction. It is particularly important to understand the flow of energy as it is critical to the design and optimization of the plasma devices. Results obtained by VizGlow™ can be viewed in an immersive environment in the figure on top to see how these three-dimensional vectors carry the energy from the coils and deposit it in the plasma field. The color of the vector indicates the strength of the vector. These three-dimensional visualizations allow researchers to comprehend the plasma field in greater detail.

If you are someone as excited about plasma flow simulations as we are, feel free to follow us at LinkedIn or reach out to us at info@esgeetech.com.

Meanwhile, if you are curious about the latest developments in plasma flow simulations, feel free to go through the following journal papers (do ask us for a free copy!):

Plasma sources capacitively driven at very high frequencies (VHF, e.g. 100MHz) have attracted much interest for semiconductor device fabrication. These sources have the advantage of high efficiency plasma generation since power couples efficiently with electrons and with lower ion energy loss through sheath acceleration. This is beneficial for processes requiring reduced ion energy, high ion and radical flux. At the same time, spatial variations in plasma density and sheath voltage can arise leading to non-uniformities at the wafer. The root cause of VHF plasma non-uniformity is related to both electromagnetic wave and sheath coupling effects. Unfortunately, most previous plasma fluid models that include electromagnetic wave effects have found it challenging to simulate this physics. Predictive models that can capture these effects are important for plasma properties and their uniformity in industrial systems. We have recently developed approaches that have succeeded in reproducing how VHF power influences plasma uniformity by hybridizing electrostatic and electromagnetic power delivery in a plasma fluid model with no loss of self-consistency. These simulations also demonstrate how low frequency added to VHF impacts uniformity through a sheath-wave interaction mechanism.