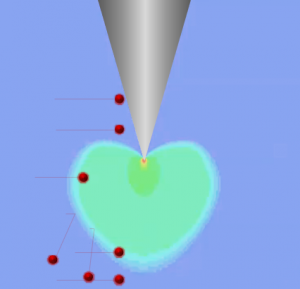 This example demonstrates charge-up of initially charge-free dust particles as they move through a pin-corona plasma. Two sets of particles move through the corona with different initial velocities. The dust particles are subject to Lorentz forcing in the electric field and their resulting trajectories are compared. The macroscopic particle dynamics is modeled in VizGrain and coupled to a background plasma solution modeled in VizGlow.

The 2D planar pin geometry and mesh is shown in Figure 1. The pin is 5mm long with a base diameter of 3mm. The pin is modeled with a sharp tip. The geometry is discretized using a fully structured mesh with 79,050 cells. A voltage of -10kV is applied to the pin with a background gas of pure argon at 1atm. 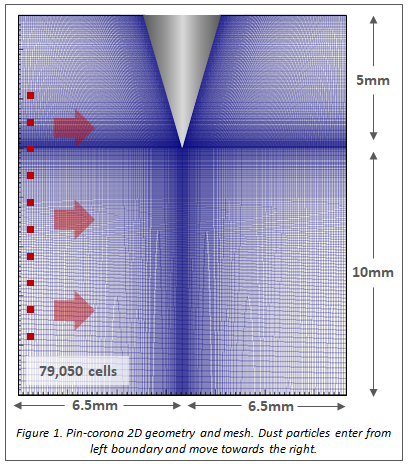 First, the background plasma and electric field is solved in VizGlow. Results from the plasma solution is shown in Figure 2.

Next, VizGrain is used to solve the dust particle motions over the background plasma. This uses a one-way coupling of the electrostatic potential and Lorentz forces with the dust particle dynamics. The resulting VizGrain solution is shown in the animation in Figure 3.

Both sets of particles charge-up as they move to the right. Charge-up is caused by the flux of ions and electrons on the particle surface. The flux is a function of dust particle size, as well as the ion and electron number densities, masses, and temperatures. This flux is also dependent on the floating potential of particles, obtained from the VizGlow plasma solution.

This demonstrates the effects of dust particle charge-up and Lorentz forcing using a one-way coupled solution between VizGlow and VizGrain. VizGlow and VizGrain are both modules within the OverViz Simulation Suite. OverViz is an industrial multiphysics framework for performing hybrid plasma, fluid flow, electromagnetic, particle simulations. For more information, please contact us at info@esgeetech.com.