VizSpark is used to model a non-transferred direct current plasma torch in pure argon gas assuming axi-symmetry along the central axis.  A steady state thermal plasma with temperatures from 15-20,000 Kelvin forms a supersonic, under expanded jet in the ambient region with visible Mach diamonds.

Plasma torches are devices that produce a steady thermal plasma jet.  There are many applications for plasma torches including arc cutting, wielding, plasma spraying and waste treatment.

A plasma torch works by passing a high current between a working gas, typically an inert gas such as argon, helium, hydrogen or a mixture of inert gases.  The high current arc heats the gas mixture to high temperatures (15-20,000 K) which then exits the device forming a jet of high temperature plasma.  Plasma torches typically use direct-current (DC) power source applied through a central (hot) powered electrode.  A plasma torch can either user a transferred arc, where the working material located outside the device acts as the anode, or a non-transferred arc where the anode is located inside the torch housing.

The simulation demonstrated here is for a direct-current, non-transferred arc using pure argon as the working gas.

Fig. 1 shows a typically plasma torch device as well as the domain and mesh for the simulation presented here.  For this simulation, an axi-symmetric assumption was made to simplify the mesh and reduce the computational cost.  The domain consists of a 2.5 mm radius tube that expands to a 5 mm.  A 2.0 mm radius pin powered electrode is placed along the axis in the wider tube region.  The walls of the tube act as the anode.  Argon gas is fed into the tube from the bottom boundary at a total pressure of 3 bar, and the ambient outer region is kept at a pressure of 1 bar. Fig. 2 shows the plasma temperature (top) and gas pressure (bottom) after a quasi-steady state has been reached.  Gas temperatures exceed 20, 000 Kelvin inside the device while gas temperatures in the ambient jet are on the order of 15,000 Kelvin.  The gas leaves the torch housing at supersonic flow velocities (4000 m/s) with pressures higher than the ambient.   This results in an under expanded jet with Mach diamonds clearly visible in Fig.2 (middle) and Fig. 2 (bottom).

VizSpark software fully support parallel capabilities using a domain decomposition approach.  Fig. 3 compares the mesh and resulting temperature for the same simulation conditions using 1 core (serial) and 48 cores (parallel).  Note that the results between the serial and parallel simulation are identical between demonstrating that there is no loss in correctness when using parallel vs serial. 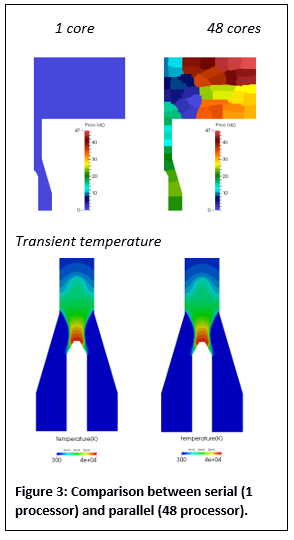 Fig. 4 is a plot of the simulation speedup (strong scaling) for the 80,000 cell plasma torch problem for processor counts varying between 1 and 48.  8 times speedup can be obtained for 24 cores and 16 times speedup is achieved when 48 cores are used. 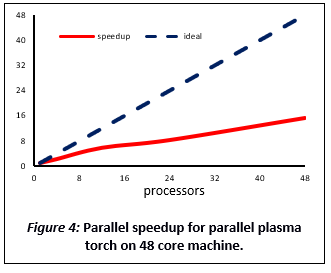