Fluid vs Hybrid Plasma Formulations for IEADFs in Semiconductor Reactors

Ion energy and angular distribution functions (IEADFs) characterize the anisotropic impact behavior of ions onto wafer surfaces in cold plasma reactive ion etchers (RIE). IEADFs can be used to quantify the etching performance and guide reactor design in the semiconductor fabrication process. Reducing the angles of ion impact at the wafer surface sharpens the resolution of the etching process, enabling the production of smaller etched features. Controlling the ion energy distributions also offers control over etching rates, shape, and consistency of etched trenches. Improving the ability to quantify IEADFs and their relationships to reactor system parameters will serve the industry’s rapid progression towards fabricating smaller features with faster throughput.

Two modeling approaches are compared to quantify IEADFs for a generic capacitively coupled plasma (CCP) reactor. The differences and advantages are highlighted. The first approach uses a purely fluid/continuum formulation of the plasma governing equations for the non-equilibrium plasma. This includes continuity, species, momentum, and energy. A self-consistent plasma formulation of the electrostatic potential is used to resolve the plasma sheaths. Ion momentum and energies and solved continuously. An external circuit model is used to supply radio-frequency power to the CCP. Boundary surface charging is also included to capture charge build-up on the wafer and dielectric surfaces.

The second approach uses a hybrid, particle-fluid approach that simulates individual ion particle motions over a fluid/continuum background fluid. Particles are dynamically generated and tracked as ions are produced in the plasma. Ion particle motions are solved using Newton’s law and include the Lorentz effects of the local electric and magnetic fields. Particle collisions are also modeled probabilistically using a Direct Simulation Monte Carlo approach.

For this comparison, a generic CCP is assumed. The CCP uses pure argon gas and is operated at 13mTorr. It is powered using a three-circuit fixed voltage waveform of 100V with circuit frequencies of 60MHz, 30MHz, and 2MHz. A multiple frequency design allows higher frequencies to control the plasma while the lower frequency serves to accelerate ions in the sheath. This CCP example is modeled using a 2D axisymmetric geometry. The geometry includes the gas/plasma volume, wafer, and dielectric volumes. The plasma gas phase chemistry is represented by 4 species (electrons E, argon ions Ar+, argon metastable Ar*, and argon neutrals Ar). The 2D finite volume mesh and key model features are shown in Figure 1. The left image shows a model schematic for the fluid approach. The right image shows a model schematic for hybrid approach. Both models used the same axisymmetric structured mesh consisting of approximately 40,000 quadrilateral cells.

Continuum results for the plasma simulation are given in Figure 2. The cycle averaged electrostatic potential is uniform throughout the plasma with a potential drop across the sheaths. The cycled averaged temperature is also uniform throughout the reactor at approximately 5eV. Adjacent to the powered electrode and wafer surface, the electron temperature reaches 8eV. The cycle averaged electron number density E and cycled averaged ion density AR+ contours (right side of Figure 2) match fairly closely. The plasma structure is uniform across the wafer radius with a peak near the wafer edge.

Figure 3 shows the electron potential with particles for the hybrid approach. A close-up of the wafer edge and sheath region is also shown. Approximately 600,000 particles were simulated. 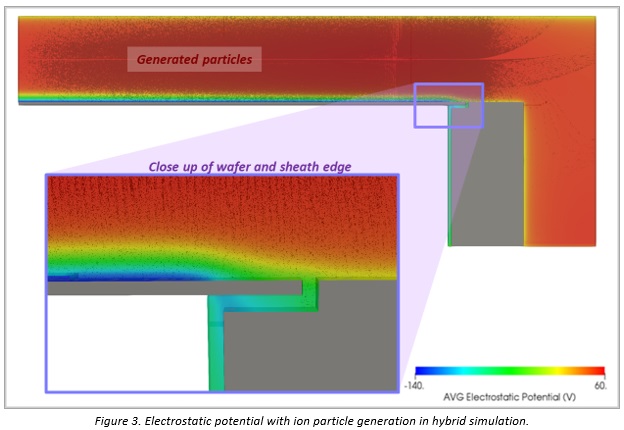 Figure 4 shows a comparison between the fluid model (left) and the hybrid model (right). Both ion impact energy (top) and impact number flux (bottom) are compared. The ion impact number density agrees well between the two approaches. Both approaches also show a uniform impact energy distribution across the radius with a sharp decrease in energy close to the wafer edge. However, the fluid approach predicts significantly lower impact energy magnitudes. The fluid model is only able to capture average values of the plasma quantities and must assume a velocity distribution for the represented particles. The fluid model accuracy degrades as this assumption breaks down, particularly for low pressure systems where the length scale of the particle mean free path approaches the relevant length scale of the system. The is particularly relevant to the sheath region within this low pressure CCP reactor. Unlike the fluid approach, the hybrid approach correctly represents the statistical velocity distributions within the sheath. This is important for plasma processing applications where wafer surface treatment is dominated by the distributions if ion behavior. 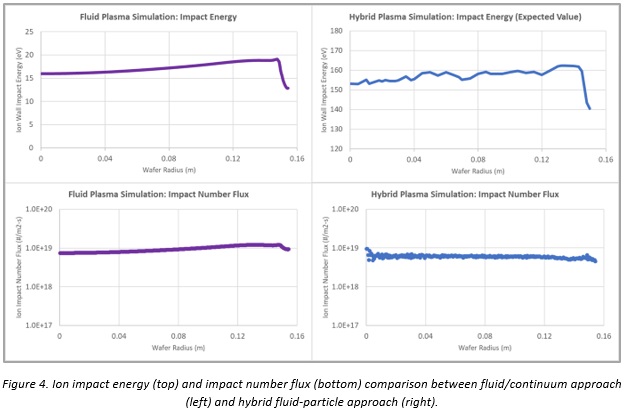 The impact angle distributions along the wafer radius is shown in Figure 6, similarly with top and perspective views. The incident angle is close to zero and fairly uniform across the wafer radius with a slight small positive incidence. A more substantial spread in impact angle is found near the wafer edge due to the potential gradient edge effects. 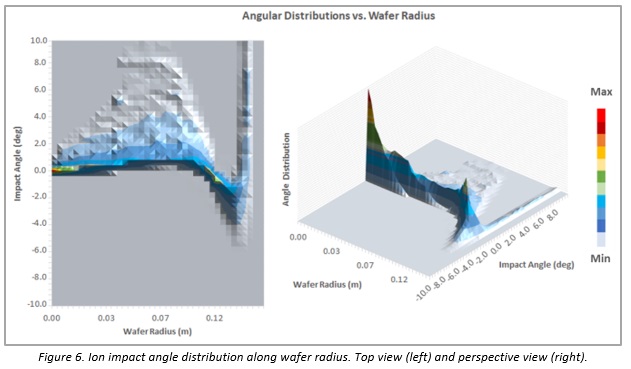 Finally, Figure 7 shows impact energy and angular distributions at five locations along the wafer radius. At the first four locations, the impact bands are consistent and distributed close to 0°. Edge effects are prominent at the fifth location where the impact band becomes wider and less focused with a decrease in impact energies. 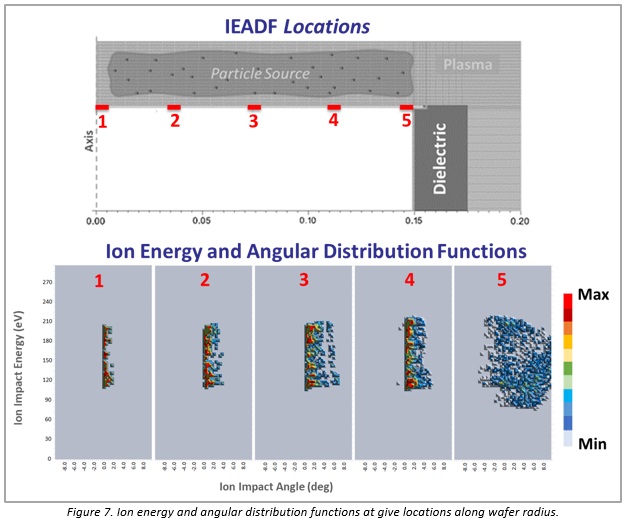 Fluid models are typically implemented when the particle mean free path in a plasma is much less than the relevant length scale of the system. At lower pressures, the length scales of the particle motions begin to approach those of the system. In these cases, kinetic particle models are considered more representative. However, kinetic models are considerably more computationally expensive than an equivalent fluid model. Hybrid models offer a compromise between the two, improving the accuracy of fluid simulations where particle length scales become relevant, while requiring less resources than a full kinetic model. The use of these models can help guide plasma reactor design, refine etch process parameters, investigate gas composition effects, explore process anomalies, and offer enhanced engineering insight into physical processes beyond traditional measurement techniques.

Analyses in this study were performed using the OverViz Simulation Suite. OverViz is a multiphysics framework for performing hybrid plasma, fluid flow, electromagnetic, particle simulations. For more information contact us at info@esgeetech.com.

Esgee Technologies Inc. would like to announce the release of OverViz Suite v2.2.1. This release contains minor bug fixes and software maintenance updates for improved usability. New installers and installation instructions are available for download from the Esgee Corporate Portal.

When setting up a new non-equilibrium plasma simulation in VizGlow, the user must select an ion momentum model. Two available options in VizGlow are “Solve ion momentum equation” and “Use drift-diffusion approximation.” This discussion is intended to help a new user understand the differences between these options and to determine which selection is appropriate for their problem.

The drift-diffusion relationships are derived from the species momentum equations and characterizes the spatial transport of particles. Drift refers to a velocity induced by the presence of an electric field. Diffusion refers to velocity induced by a density or concentration gradient.  Both drift and diffusion are collisional in nature, e.g. both are governed by an average motion due to a driving electric field or density gradient force along with numerous collisions with a dominant background species.

are neglected.  Second, assume that time variations are slow such that

term can be neglected.  Pressure can be expressed using the ideal gas equation of state.  If time variations are slow, then temperatures will have time to equilibrate with their surroundings and T can be assumed to be constant (isothermal).

With these simplifications, the momentum equation becomes

This results in the following relationship such that drift-diffusion species flux  is function of electric field strength and density gradient.

Note that the background collision frequency appears in both the drift and diffusion variables which confirms that they are collisional dependent processes.

Because this equation is an algebraic function rather than a PDE, it is far less computationally expensive to solve (and also tends to be slightly more stable in practice from a numerical standpoint).

The need for solving the full ion momentum equation for ions arises in low pressure discharge (P < 100’s mTorr) or in small-scale micro-discharges despite the high pressures. In these situations, the number of collisions is reduced and ion inertial effects between collisions should be considered.

The important factor to consider is the influence of ion inertial effects and collisions to the particle momentum. If you have any further questions, please contact us at info@esgeetech.com.