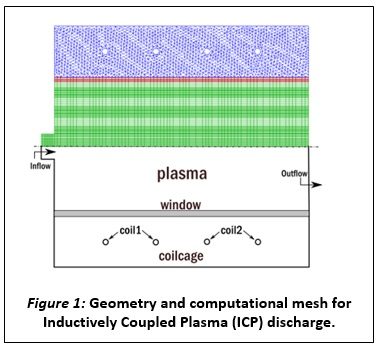 .This application overview discusses the modeling of a flow-through Inductively Coupled Plasma (ICP) reactor with VizGlow and provides an example of tightly coupled multi-physics simulations with the software.  Discharge physics including multi-temperature, multi-species transport, and finite-rate plasma chemistry effects are coupled to electromagnetic wave phenomena driven by inductive coils, and a bulk fluid flow through an inlet/outlet configuration.

The geometry and mesh for the plasma discharge simulation are shown in Figure 1.  The axisymmetric discharge comprises a dielectric tube of 10 cm inner diameter that is closed on the left with flow inlet along the axis (inlet diameter 1 cm) and an open inlet on the right.  The axial length of the discharge is 20 cm.    The dielectric tube thickness is 5 mm.  Four coils are place just outside the dielectric window and are driven by radio-frequency (RF) currents to generate non-equilibrium plasma within the tube.  The RF coil frequency is 13.56 MHz and the coils deliver a total of 300 W into the plasma.  The first set of two coils on the left indicated by “coil1” are driven at a current phase lag of 180ocompared to the second set of coils “coil2”.  Furthermore the “coil2” is driven with 50% greater current than “coil1”, i.e. at any instance Jcoil2 = -1.5 Jcoil1, where J is the coil current.  The radiation from the coils is confined on the outside by caging the discharge within a conductive boundary.  A 100 sccm pure argon gas flow enters through the inlet boundary and exits from the outflow boundary where a 100 mTorr pressure is imposed.

The above class of flow-through plasma discharges are encountered in applications such remote-plasma materials processing reactors and in plasma abatement of contaminants from a semiconductor process reactor.

The computational mesh contains a total of 11,530 cells, and is divided into 5 physical sub-domains: the coil cage, which houses coil pairs coil1 and coil2, an annular dielectric window and the plasma sub-domain that represents the region where the plasma is generated. VizGlow gives the user complete flexibility in choosing the type of mesh (triangles, quadrilaterals, or a mix of both in two-dimensional problems).  The plasma subdomain is meshed with a pure rectangular mesh while the outer coil cage is meshed with triangles.

The ICP plasma is modeled using the quasi-neutral approximation; although VizGlow provides self-consistent plasma modeling option that is used to simulate other classes of plasma discharges (see other VizGlow Application Notes for examples).For ICP discharges, which produce relatively high charge densities, the plasma sheaths are typically thin and the quasi-neutral formulation provides is a reasonable approximation.  The advantage of the quasi-neutral approximation is the large simulation time-steps and relatively low computational cost.  The RF-driven coils generate an electromagnetic (EM) wave in the domain which is modeling using the frequency domain option; a time-domain EM wave option is also available in the VizGlow software.  The gas flow is solved with the compressible Navier-Stokes solver that is also an option in the VizGlow software package.

The coupled model is solved to a steady-state which takes about 500 microseconds in “electron time”.  Figure 2 shows the convergence of the solution to a steady-state as judged by monitoring important plasma variables (e.g. potential, charge species density, radical densities, etc.) at specific locations “trace points” in the discharge volume.  More than one location is often required to judge convergence.  Note that this “trace point” check for simulation convergence is the safest approach to judge convergence.  Other convergence tests such as monitoring of volume-averaged variables are known to trigger premature (false) steady-states much earlier in the simulation. The problem was solved on a single 2.66 GHz Intel® processor in ~ 4 hours of wall clock time. 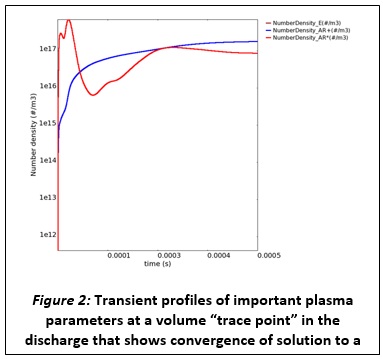 The real and imaginary components of the EM wave field phasors are shown in Figure 3.  The 180o phase difference between the two sets of RF coil currents is reflected in the wave structure shown in the figure.  Since the problem is axisymmetric, the coils drive a pure azimuthally polarized wave in the domain (i.e. only the azimuthal component of the wave field is non-zero).  The wave field magnitude on axis is zero for this polarization as shown in the figure. 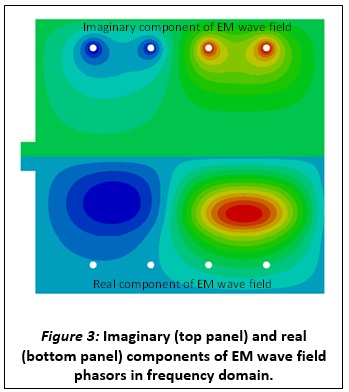 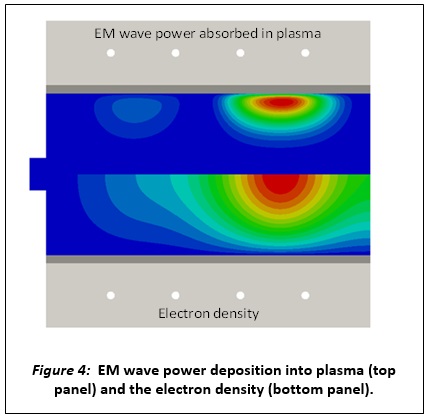 Finally, the argon metastable radical density contours are shown in the top panel of Figure 5.  The radicals are produced with the much lower threshold energy than the charged species and hence significant densities of these radicals are observed under both sets of coils, the density below the second coil set “coil2” being higher.  The peakmetastable radical density shown is ~2e17 m-3.  The magnitude of the gas flow velocity is shown in the bottom panel of Figure 5.  The gas velocities are highest at flow inlet nozzle location on axis and have a maximum velocity of 66 m/s.  The flow expands and moves to towards the outflow boundary at much lower velocities.  The plasma structure is largely unaffected by these flow velocities.  For the imposed flow rate of the 100 sccm the flow velocities remain subsonic, although supersonic choked flow conditions are often encountered for high flow rates.  For such higher flow conditions significant flow-induced modifications to the plasma structure, especially the neutral species, can occur because of flow. 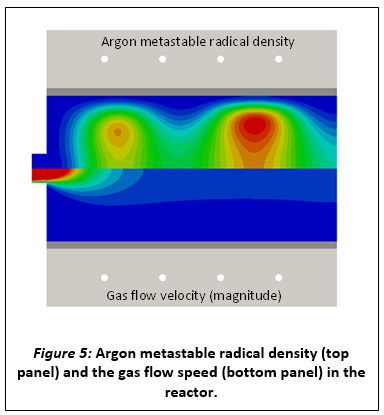 Microwave Reactor in the Frequency Domain 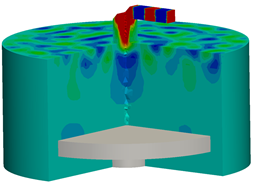 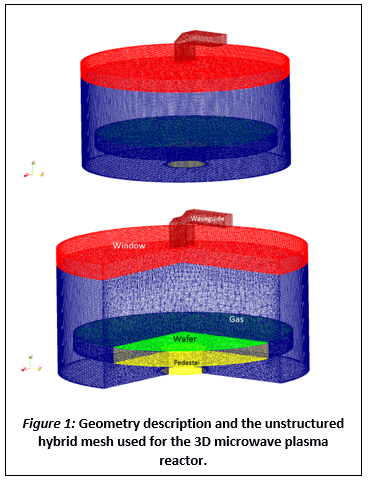 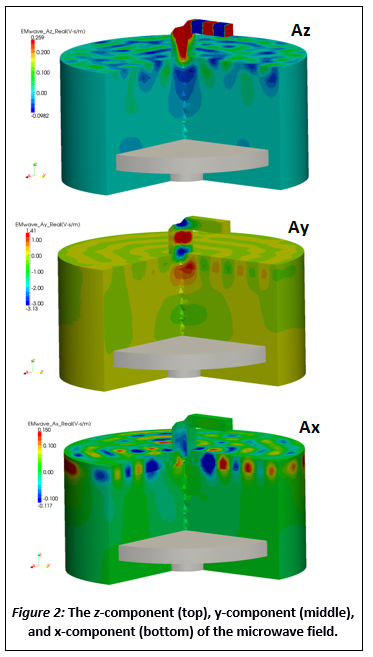 Capacitively Coupled Plasma (CCP) discharges in parallel-plate configuration are commonly used in semiconductor and other materials processing applications.  These discharges provide a compact platform in which a plasma can be generated to process a flat wafer surface.  The highly directional ion impact at the wafer surface with high ion impact energies is beneficial to a number of wafer processes; in particular for etch processes.  This application note discusses the simulation of a typical CCP reactor used in the semiconductor process industry.  The VizGlow Plasma Modeling Software Package is used.

The geometry and computational mesh for this problem is shown in Fig. 1. The mesh contains about 21,000 cells, and is divided into 6 physical subdomains.  The geometry includes a gas subdomain where the plasma is formed, a top grounded electrode, a bottom powered electrode that holds a wafer, a top dielectric that isolated the top electrode from the grounded reactor wall, a bottom dielectric that isolates the bottom powered electrode from the reactor walls, and a focus ring that defines the edge geometry for the wafer and the powered electrode.  The mesh comprises a mix of quadrilateral and triangular cells in domain.  Specifically the plasma (gas) subdomain is meshed with quadrilateral cells that have non-uniform resolution to capture the sheaths at wall and wafer boundaries accurately. 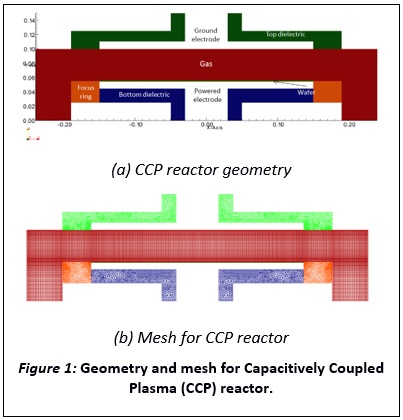 The wafer has a standard 300 mm dia.  The wafer is assumed to be made of silicon, the dielectrics are made of alumina, and the focus ring is made of quartz.  The powered electrode is driven by a 100 MHz excitation frequency that delivers 300 W radio-frequency (RF) power to the plasma. A pure argon gas at 50 mTorr pressure is assumed.

The plasma gas phase chemistry is represented by 4 species (electrons E, argon ions Ar+, argon metastables Ar*, argon neutrals Ar).  The plasma chemistry comprises 6 reaction including electron impact excitation and direct ionization, stepwise ionization, Penning ionization, and metastable quenching.  The simulations are run to a periodic steady state. The VizGlow Plasma Modeling Software Package is used in self-consistent mode to solve for the CCP plasma phenomena.  These simulations are performed without including electromagnetic (EM) wave effects that are known to redistribute power deposition in the reactor. 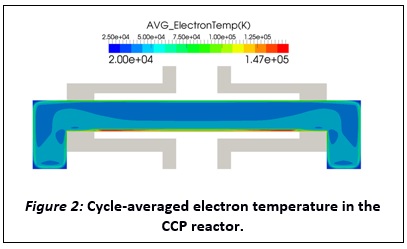 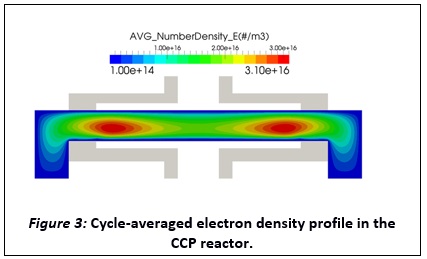 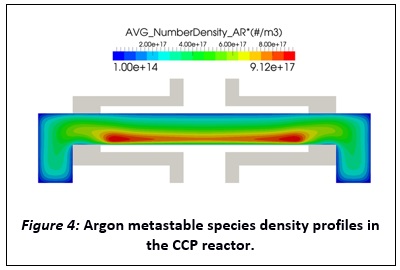 Figure 5 shows the ion energy distribution function (IEDF) for ion impact at two locations on the wafer surface.  The IEDF information is generated automatically by VizGlow and is a useful metric for process behavior at the wafer surface.  IEDFs for the wafer center and edge are shown.  Ions impact the wafer surface with a range of energies depending on the excitation frequencies, mass of ions, and the sheath thickness.  A classical bi-modal IEDF is seen.  For the reactor condition used in these simulations, the lowest ion impact energies are between 15 and 20 eV and the highest are between 30 to 35 eV.  The IEDF width is nearly the same for both the wafer center and edge locations.  The wafer edge IEDF is shifted to a slightly higher energy compared to the wafer center. 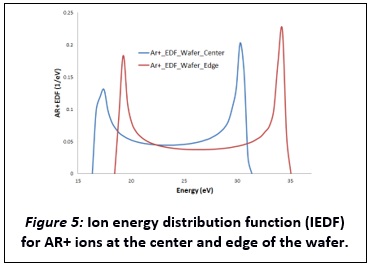 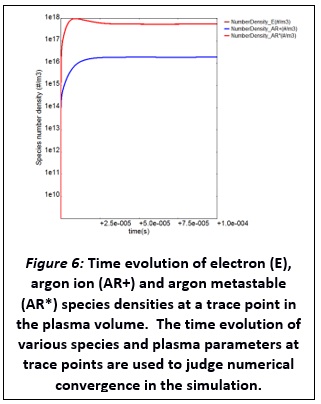